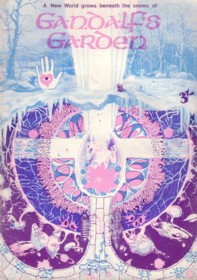 
Gandalf's Garden was a mystical community which flourished at the end of the 1960s as part of the London hippie/underground movement, running a shop and a magazine of the same name. It emphasised the mystical interests of the period, and advocated meditation in preference to drugs. Muz Murray was prominent and editor of the magazine (and is now a world-travelling Mantra Master).

The magazine emerged in 1968 and ran to 6 issues. It was part of the then-current Underground press, following the lead of the International Times and, particularly, OZ in departing from conventional black and white pages. In contrast to the psychedelic mayhem of many issues of OZ, Gandalf's Garden magazine was lyrical in choice of, for example, peach, light blue or pastel pink sheets with burgundy type, the colours rotating through the magazine. Sample articles are “The Glastonbury Mystique: Jesus and the Druids” and “The Third Ear Band”. The letters page was called the “Seedbag”. A touch of satire came in the form of a page “Oh to be in England” (press cuttings). Some well-known contributors to the magazine included Christopher Logue, Adrian Mitchell, Joan Baez and Spike Milligan.

Back to European G Title